Can modern methods of construction help to close the UK’s productivity gap?

What is the productivity problem in UK construction?

Construction accounted for approximately 6% of the UK’s gross domestic product in 2019 and employed nearly one in ten of the workforce. Despite the sector’s huge role in the economy and its influence on our key economic indicators, productivity has been largely flat over the last 20 years, although there are signs of some small recent gains. Conversely, industrial manufacturing has improved by more than 25% and automotive by over 45%. Of course, those activities are largely not at the mercy of the inclement British weather. However, Britain is not alone in facing uncertain external conditions and yet Germany built 3.6 homes per 1,000 people in 2018 and France built 6.8.  In the UK we managed 2.25.

It is difficult to point to a single cause for the lag in productivity.  It could be the fragmented nature of our sector, the lack of connectivity and co-operation between supply chains or the methods of building and our approach to technical and quality specifications. The ways we attempt to reduce cost are likely unhelpful and add to the productivity and rework conundrum. Piecework certainly sounds like a nice idea: what better way is there to motivate someone to work faster than by tying their remuneration directly to their output?

Sub-contracting and piece work sound great in theory but with little direct employment, quality control and overall efficiency will eventually suffer. When key performance indicators emphasise quantity over quality, defects are almost a foregone conclusion. The Home Builders Federation satisfaction surveys show a rise in the number of customers reporting snags, up from 93% in 2015 to 99% in 2018. Can you imagine another industry which could accept a success rate of 1 in 100 units? One medium-sized housebuilder that we know of was spending more than £10m a year correcting defects. Aside from the obvious financial costs, the knock-on effect will only lose more productivity. In an industry that works on an average 5% profit margin, a £10m bill for defects must be paid for by £200m in additional revenue.

Margins are frequently thin in construction. Cash is king but often scarce. Despite both these difficulties, pricing is relentlessly squeezed, and the supply chain is often asked to find the savings. This continued pressure on pricing and the necessity to keep filling the pipeline is likely to be a large source of the 99% defects that we see in house building. As the pressure is pushed down the supply chain the squeeze forces subcontractors to maximise quantity, encourages over value engineering and causes a general lack of focus on quality, often to the detriment of all concerned.

Does it have to be this way? The simple answer is no, although the solutions are more nuanced and the path to greater profitability and increased productivity is not linear.

Modern methods of construction (MMC) is a catchall term for innovations in working practices and non-standard construction techniques. Some limit it to describe the materials and production phases of construction; others are more holistic, believing the advance of digital tools is a core part. For many of us, MMC conjures thoughts of volumetric modules or pods; however it covers everything from building information modelling (more on that another time) to 2D panels, 3D volumetric modules and everything in between. MMC uses include site verification, productivity planning and worker augmentation (exoskeletons).

We will look at some of these tools and the opportunities they provide in future updates so forgive me if this feels more of a whistle-stop introduction (for it is).

Some may suggest the slack in the system or the lack of productivity, particularly in housebuilding, is by design. Why would a housebuilder want to build homes any faster? Oversupply of housing stock would only reduce its sale price, which is unlikely to help those margins.  Whilst the Government says that we need more houses and we must build faster, could it be possible that the industry is working at the pace that suits it best, and by speeding up they would risk losing more money?

Let us assume not, and the industry wants to improve productivity, work faster, and increase output.  We need to get more work out of the same people – the shortage of skilled labour is well documented and probably will not improve any time soon. We have not yet seen the full effect of Brexit on the labour market, but it is unlikely to be good news, particularly in the South East.

MMC might reduce the need for labour on site but this does not remove jobs. It is part of a push to ensure that we are using our finite number of skilled people as efficiently as possible. Redeploying them and balancing supply with demand will be the keys that unlock future productivity gains. Without this our productivity will continue to lag other industries, we will fall short of domestic targets on building and will lag the performance of our neighbours over the water in Europe.

But what can MMC offer?

According to the British Architects Association and several anecdotal first-hand reports that we have seen, it can dramatically reduce the labour needed on site. Some estimates suggest savings over 30% of the overall programme costs and a 70% reduction in on site labour. Fewer people on site means less bureaucracy, a smaller chance of reportable injuries and ultimately less impact on the local area.

One housebuilder that we know well reduced waste per home by 75% when it switched to a closed panel system.  These are wooden frames produced off site (sometimes abroad) and lifted in to position as structural panels with insulation and service voids already installed. The direct cost of each plot increased by approximately £30 per square foot but the programme was cut by an impressive 66%.  This scale of reduction in closing out structures would certainly help to reduce the risk of delay or weather damage and would likely help cashflow. 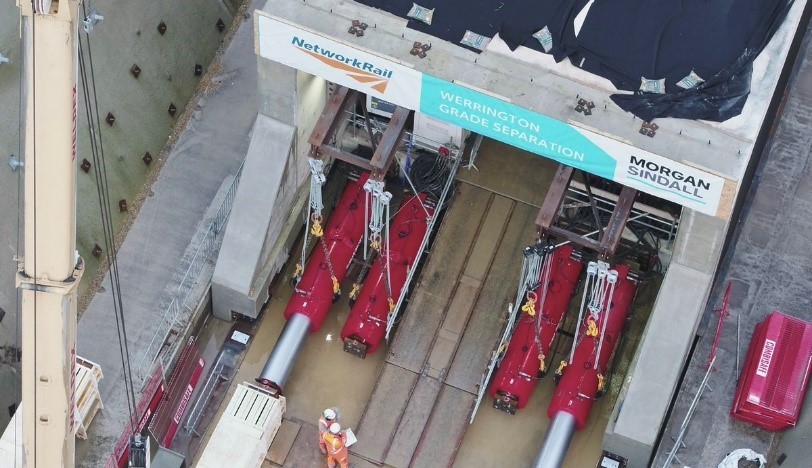 But what about the rest of the industry? Housebuilding, by no means, has any exclusivity over MMC.  In fact some of its earliest innovations were in precast concrete, used extensively in commercial and infrastructure construction. The innovation continues and Morgan Sindall (see the image above) recently used four hydraulic jacks to push an 11,000-tonne tunnel into position as part of its upgrade works on the East Coast Mainline. The prefabricated 155-metre structure was pushed into place over a period of nine days, saving ‘hundreds of hours’ of disruption for passengers.

Increasing the certainty of outcomes, as Morgan Sindall did, is seen as an important benefit of MMC. The risks associated with an over run on a major passenger rail route would be considerably less palatable had the team relied on traditional pour in situ techniques. Speed is often another factor in the choice of MMC. Many schools, hospitals and government tenders require a tight deadline with minimal disruption to the occupants of the site. Doing the bulk of the work off site significantly reduces the time on site and thus the disruption.

Quality is one of the biggest improvement opportunities for MMC tools and techniques. From adopting digital twins in building information models (BIM) to producing bathroom pods in a factory, quality is likely to improve. BIM allow faster access to plans and drawings with assured integrity whilst the factory environment enables more rigorous quality control and less deviation from design than could ever be achieved on site.

We hope to provide more updates and thoughts on the construction and building materials sector over the coming months. Initially, we will focus on some of the nuances of MMC, including the available tools and techniques and some of the challenges in migrating to them. Over time we hope to widen this and of course if there are areas you would like us to cover please do get in touch.